A novel fabrication technique developed by a University of Connecticut engineering professor could provide the breakthrough technology scientists have been looking for to vastly improve the efficiency of today’s solar energy systems. 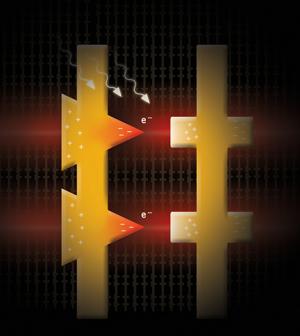 This is an illustration of a working optical rectifying antenna, or rectenna. Credit: (Illustration by Justine Braisted/UConn)

For years, scientists have studied the potential benefits of a new branch of solar energy technology that relies on nanosized antenna arrays theoretically capable of harvesting more than 70 percent of the sun’s electromagnetic radiation and simultaneously converting it into usable electric power.
But while nanosized antennas that also serve as rectifiers have shown promise in theory, scientists have lacked the technology required to construct and test them. The fabrication process is immensely challenging. The nano-antennas – known as “rectennas” because of their ability to both absorb and rectify solar energy from alternating current to direct current – must be capable of operating at the speed of visible light and be built in such a way that their core pair of electrodes is a mere 1 or 2 nanometers apart, a distance of approximately one millionth of a millimeter, or 30,000 times smaller than the diameter of human hair.